The Gift of Knowing: A Biblical Perspective on Knowing and Truth 2nd Edition (PDF eBook)

The Gift of Knowing offers a Biblical perspective on knowing and truth, arguing that God’s word gives the only foundation for knowledge.

To any attentive observer, the Western world is in serious trouble. It shows the signs of languishing under a devastating disease. This is clearer nowhere else than in the realm of epistemology, the study of truth and how we attain it. Here, the belief in human autonomy—the freedom of individual men and women to interpret the world and live within it as they see fit—has slowly eroded any foundation for knowledge or morality. The result is a society adrift, floating wherever the tide might take it.

If the disease ravaging our society is the belief in human autonomy, the cure is submission once again to the God who created this world, at least that is the argument of The Gift of Knowing. The author argues that apart from submission to God as He has revealed Himself in the Christian Bible, there is no firm foundation for truth or a trustworthy way of attaining it. However, through His revelation in Scripture, God has given His people a foundation for knowing the world He has created and living within it.

As the first volume of the series, “God’s Gifts for the Christian Life,” The Gift of Knowing lays an epistemological foundation for the task of Christian theology. All human knowing, including the interpretation and application of Scripture, must start from the presupposition of God’s absolute authority expressed through His written word.

Errata: many typographical errors were corrected in the 2nd Printing. Originally, it was erroneously stated that Thales, the first philosopher, taught that all things changed and that his student, Anaximander argued that change was an illusion. These are the positions of Heraclitus and Parmenides, respectively. Thales argued that all is fundamentally water; Anaximander argued for the apeiron, or the “limitless,” as the fundamental substance. This has been corrected in the 2nd Edition.

There are no reviews yet.

Only logged in customers who have purchased this product may leave a review. 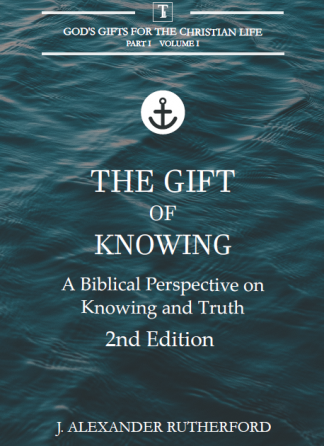 You're viewing: The Gift of Knowing: A Biblical Perspective on Knowing and Truth 2nd Edition (PDF eBook) $8.00 $8.96
Add to basket

We noticed you're visiting from Canada. We've updated our prices to Canadian dollar for your shopping convenience. Use United States (US) dollar instead. Dismiss